INTERLOCK BULLETS: The American Whitetail Ammunition InterLock bullets feature exposed lead tips for controlled expansion and hard-hitting terminal performance. Bullets used in American Whitetail ammunition feature our pioneering secant ogive design and exclusive InterLock ring – a raised ring inside the jacket that is embedded in the bullet’s core that keeps the core and jacket locked together during expansion to retain mass and energy.
POWDERS: Loaded to conventional velocities, the powder is matched to each load for optimum pressure and consistency, ensuring each load is compatible with semi-autos as well.
CASE AND PRIMER: Like all Hornady ammunition, our American Whitetail rounds use the highest quality cases and primers available. Consistent components translate to consistent shooting in the field.
The Hornady InterLock bullet is designed to be a devastating hunting bullet and nothing less. The InterLock Ring, An American Whitetail Ammunition Hornady exclusive, ensures that the hard-alloyed lead core and tapered jacket remain locked together during expansion. The resulting bullet retains more mass, energy, and momentum after impact and transfers that energy into the target. It is this reliable stopping power that has earned the InterLock a worldwide reputation as a bullet for the serious hunter. This ammunition is new production, non-corrosive, in boxer primed, reloadable brass cases.

There are no reviews yet. 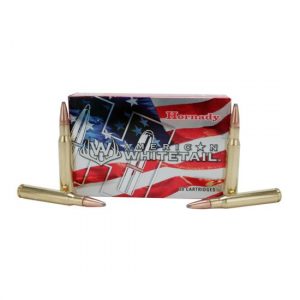 You're viewing: HORNADY .30-30 WINCHESTER 150 $250.00 – $500.00
Select options
Sign in Create an Account
Lost your password?
Select the fields to be shown. Others will be hidden. Drag and drop to rearrange the order.
Click outside to hide the compare bar
Compare
Compare ×
Let's Compare! Continue shopping
Shopping cart close